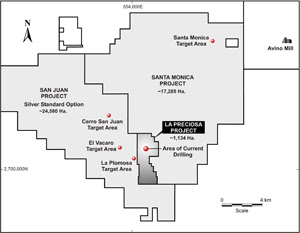 Orko Silver Corp. (under previous name “Orko Gold Corporation”) entered into an option agreement in late 2003 with two companies under the direction of Luismin S.A. de C.V., now a part of Goldcorp Inc., to acquire an interest in the La Preciosa silver-gold prospect. A news release, dated 4 March 2006, states that Orko has reached an earn-in position and by agreement has 100% of La Preciosa, with Goldcorp holding an equity interest in Orko.

La Preciosa property covers Tertiary aged gold and silver bearing epithermal quartz veins, with barite and lesser quantities of base metals, primarily zinc and lead. There are three major vein and vein-breccia systems exposed on a series of hills and ridges, separated by flat floored valleys roughly 800 m wide. The main vein system consists of northward striking and westward dipping veins, plus east striking south dipping cross-cutting veins. The eastern vein-breccia system (Zona Oriente) strikes northwest. Two systems may intersect to the north beneath younger basalt. To the west of these is a third sub-parallel vein system, with north and northwest trending veins, dipping to the west.

La Preciosa veins are composed of poly-phase veins of quartz, often banded, smoky, chalcedonic and amathystine, with a substantial amount of barite laths. Sulphide mineralization is scarce on surface and in the shallow underground workings. Drill core contains disseminated sphalerite, galena, pyrite and acanthite, plus iron and manganese oxides. Wall rocks adjacent to the veins are silicified, particularly between the prominent veins La Gloria and Abundancia. Kaolinite and hematite alteration is common, as well as more distal propylitic chlorite, epidote and pyrite.

The oldest rocks, found only in deeper drill core, consist of Jurassic-Cretaceous graphitic schist, chlorite schist and layers of quartzite. Above the metamorphic units is a thick package of Cretaceous polymictic conglomerate, with lenses of arkosic sandstone. This sedimentary package is topped by Tertiary andesite tuff and andesite agglomerate of the regional Lower Volcanic Sequence. No rhyolites of the Upper Volcanic Sequence are found in the immediate study area, but can be seen on cliffs further to the west. The conglomerates and andesitic rocks are the main host rocks for the veins, but mineralization also extends into the metamorphic rocks. There are a few dioritic dykes in deeper core, but intrusive rocks are generally rare. The youngest unit comes from several Quaternary volcanic vents which erupted basalt flows, filling the lower valleys.

Seven diamond drill holes, totaling 1,319 metres, were drilled by Luismin in a 1981-1982 program. The group of holes were mainly collared west of the Abundancia and La Gloria veins to test a 400 metre strike length of the veins roughly 50 to 75 metres below the 2065 level. The best intercept was from BP-1, which hit a true width of 13.6 metres at 232.0 g/t Ag and 0.10 g/t Au. Hole BP-7 was a longer hole which tested Abundancia and La Gloria veins and also intercepted the sub-parallel Luz Elena vein at greater depth. The 1981-1982 drill program was terminated due to falling metal prices at that time. Core from Luismin’s program was split and the remaining half is intact and stored on site.

A single 313 metre hole was drilled by Luismin in the eastern vein-breccia system in 1994. The hole intersected a series of variable silicified zones and veinlet stockwork anomalous in Ag, Au, Pb, Zn and Hg, but did not pass through the complete structure.

In the 1980s, Luismin staff prepared several preliminary resource estimates, which were in-house and do not meet the current NI 43-101 reporting requirements for disclosure of Reserves and Resources. The studies showed a general “Resource” in all categories of approximately 320,000 tonnes in the Abundancia and La Gloria veins grading 238 g/t Ag, 0.70 g/t Au and 0.17 % Pb. The “Proven and Probable Reserves” stood at 30,000 tonnes grading 319 g/t Ag, 1.0 g/t Au, with 0.55 % Pb and Zn combined. These estimates do not follow the requirements for reserves and resources outlined in NI 43-101 as they were estimated prior to the enactment of NI 43-101, however, they have been obtained from sources believed reliable. The resource estimates are considered to be historic, are relevant, but have been replaced by recent estimates utilizing much more drilling data and using current CIM terminology.

In June of 2004, Orko commenced a geological mapping and sampling program on La Preciosa. This was followed by a 40 line-km geophysical survey of Induced Polarization in the northern part of the property in January 2005, performed by SJ Geophysics under Orko’s guidance. Orko commenced diamond drilling in March 2005 by Major Drilling International on La Preciosa Ridge, targeting Abundancia and La Gloria, but also extending to Luz Elena vein. The first 24 drill holes were completed by late October 2005 totaling 10,259 metres of diamond drill core.

Favourable results from drilling and interpretation of distinct mineral-shoots within the Abundancia and La Gloria veins gave reason for Orko to make a first resource estimate for the property. Using a cut-off grade of 150 g/t silver-equivalent, Inferred Resource Estimate I totaled 2.72 million
tonnes grading 227.2 g/t Ag and 0.462 g/t Au for a silver-equivalent grade of 255.0 g/t. Resource Estimate I was released on 19 January 2006 (Gunning and Whiting, 2006).

In total, eight veins were modeled for the new estimate including the Martha Vein, which dominates the resource. In the process of modeling, lithological units were differentiated which helped in establishing the orientation and continuity of the individual veins. Using geological data along with the metal grades, it was possible to establish continuity of mineralized zones of stockwork, breccia, veins, and veinlets. The high-grade veins within these zones were segregated and modeled. All zones and veins were modeled into a three dimensional solid. Once defined, statistics of each domain and each vein were evaluated separately, and capping was carried-out individually for each vein and domain. The sample data was then composited to three-metre intervals. Grade continuity was evaluated separately for each vein and domain. Inverse distance squared estimation was used. A cut-off grade of 100 g/t was selected by MDA. Classification into Indicated and Inferred was dependent upon the vein continuity, geological continuity and proximity to the closest drill hole, as well as the number of samples and the number of drill holes used in the individual blocks.
All reported resources lie within the modeled veins. The QA/QC work demonstrates reliability of the analytical data and the auditing of the database has shown it is accurate.

* The six resource estimates are all undiluted using a 60:1 gold to silver ratio with no metallurgical extractive factors applied.
Average drill hole spacing is approximately 100 metres for all the holes drilled from 2005-2008. For the 1981-82 program, analytical testing was performed in the Luismin Labs in Durango, Mexico. All 2005-2008 analytical testing has been done by SGS or Inspectorate laboratories, North American based labs both containing ISO certification.

The Martha vein, first identified in hole BP06-77, represents the most significant new target. It is relatively flat lying, dipping an average of 20 degrees to the west. It has a known lateral extent of over four kilometres and varies in widths between 200m to 1.7 kilometres. The Martha vein varies in thickness from one meter to sixty meters and averages about 15. Within that are one or more veins or vein breccias which contain the resource grade material and which average about five meters.

Orko has conducted geological mapping, geophysical testing and has systematically drilled a portion of the known strike length of epithermal silver-gold veins on the property. Two of the veins, La Gloria and Abundancia, were drill tested each along 1.2 km strike length to establish veins on “La Preciosa” which have been traced for five kilometres north-south, as well as multiple east-west veins. Some of the veins include Abundancia, La Gloria, Luz Elena, Carmen, Esperancita, Transversal, Incognita, Nueva, Sur, Ramal Sur, El Orito, Nancy, etc. The Martha Vein has been the focus of drill testing since its discovery in 2007.

The resource estimate results are considered highly favourable by Orko’s management. In-fill drilling will be completed by the Company to further increase the confidence in the La Preciosa deposit and to move more of the inferred and Indicated resources into higher resource categories. Expanding Martha vein along strike and at depth, as well as drill testing additional north-south and east-west veins located in the immediate vicinity of the Martha vein, are the main targets.