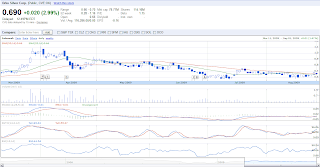 By looking at the chart today and studying the details I’m more and more inclined to believe that Orko Silver really is breaking out of its sideways pattern.
Mind you not breaking out as a rally, just a change in the current trend which I consider very positive.

I see the last 2 trading days closing above the 20 moving average which is a good sign. We’ve also seen a break above 0.70 again.
On the 28th of august we had some greater volume of shares traded. That might just be some of the folks that sold on the 19th of august returning to Orko Silver for the next journey ahead 😉

All in all, something does seem to be changing for Orko. Wether we will see continued gains in anticipation of the drilling results I don’t know but I wouldn’t rule it out.
Especially considering that the possibility of Orko releasing news about their drilling results this month could be greater than one might think.

We also have a large gold forum in Denver going on which starts 13 September and ends 16 September.

For those that browse to their forum sponsor page will see that Pan American Silver is acting as a presentation sponsor.
I’m guessing Pan American Silver will also be plugging Orko Silver on the Denver Gold forum as they ofcourse will also profit from a producing La Preciosa mine and basically all the coverage they can get amongst investors.

And last but not least,…we’re in September and with the summer doldrums behind us gold and silver should do well in these coming months.

Here’s to Orko Silver Corp and Pan American Silver! May they mine silver and prosper!