Original news release on Orko Silver Corp. can be found by clicking here.

The Pan American Phase-I delineation drilling at La Preciosa consisted of 31 HQ diamond drill holes for a total of 8,850 meters. To date, PAA has received results for approximately 6,300 metres of the drilling. The holes are located in the heart of the Martha vein structure and were drilled at approximately 50 metre spacing in an area previously drilled by Orko at 100 metre spacing. This data confirms La Preciosa results and will form the basis of a geostatistical study, toward ultimate reserve definition. Phase-II diamond drilling is underway.

In addition to the drilling, PAA has completed 57 trenches on regional exploration targets with the resultant collection of 557 samples. These results have encouraged PAA to commence drilling on the exploration targets such as El Vaquero, Nancy, Baritina, Baritina Norte (Martha North) and Orito Norte.

Pan American has also completed 90% of a planned first phase detailed metallurgical program that has included work index tests, abrasion tests, mineralogical studies, gravity tests, cyanide tests and flotation tests. Full results from these studies will be released when they are completed.

The Phase I delineation drill program has been successful in confirming the results from the previous drilling completed by Orko from 2005-2008. The detailed drilling has been completed in a 50m by 50m grid, centered in the vicinity of Orko hole BP-06-75(ext) which returned results of 39.66m of 235.2 g/t Ag, 0.37 g/t Au for a silver equivalent of 257.5 g/t.

In the area of delineation drilling, Martha occurs as a very thick structure, as shown in the following table:

Summary of Martha Vein intercepts added for this release: 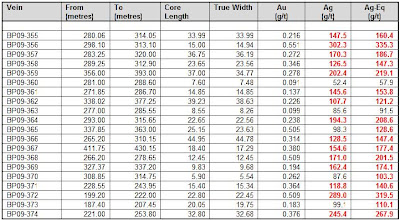 In addition to targeting the Martha vein, some of the westernmost holes also passed through the Abundancia vein.

A complete table of drill results is available on our website at the link below:

A detailed drill plan map is available on our website at the link below:

Ben Whiting, P.Geo., and George Cavey, P. Geo. are the Qualified Persons for Orko Silver Corp. and take responsibility for the technical disclosure in this news release.

ON BEHALF OF THE BOARD OF DIRECTORS

For further information, contact Orko Silver Corp. at (604) 684-4691 or
Via email or visit our website on line at www.orkosilver.com

*Cautionary Note to U.S. Investors – The United States Securities and Exchange Commission permits U.S. Mining companies, in their filings with the SEC, to disclose only those mineral deposits that a company can econ
omically and legally extract or produce. We use certain terms in this press release, such as “measured”, “indicated”, and “inferred” resources, which the SEC guidelines strictly prohibit U.S. registered companies from including in their filings with the SEC. U.S. Investors are urged to consider closely the disclosure in our Form 20-F, File No. 000-51923, which may be secured from us, or from the SEC’s website at http://www.sec.gov/edgar.shtml.