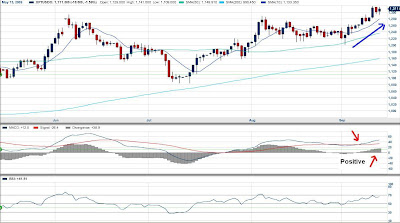 At the start platinum moved a bit down to around 1295 and after that went slowly back up to end around 1,311. Also gold and silver made a correction. Gold is now up again almost at 1,000.

I put some arrows on the chart. The blue one points in the direction of the trend and that is clearly up. The MACD has made nice cross over (upper red arrow) and the histogram is in the positive (lower red arrow). We made today the same high as yesterday but a lower low (2$ lower). Let’s see what tomorrow brings.