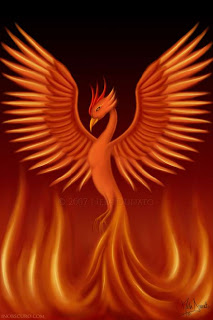 For today you’ll have to settle with my writer’s rant, tomorrow I’ll do the chart of the day.

As I saw the action unfolding today there was one thing that popped in my head, don’t know why but it did. As I was looking at that weekly chart from yesterday and the point where we are at….

the rising of the Phoenix

If I had to make any kind of relation to Orko Silver then yes, it would be with a Phoenix. A Phoenix is a mythical fire bird which first saw its origins in Phoenician (2300-1200BC) mythology, later in Egyptian and even later in the Greek mythology. The Phoenix has a long lifespan of 500 to 1000 years, at the end of its life cycle the Phoenix will build itself a nest of myrrh twigs and once completed will ignite reducing bird and all to ashes. From those very same ashes a new Phoenix bird will rise with the same lifespan as its former self.

Orko Silver Corp. already has had its figuratively speaking to ash-reduction part over and done with. Now it has arisen from the ashes of this current credit crisis all the stronger and with a renewed lifespan.

Basically, normal human talk. Who in their right minds would still consider holding all of their expandable (*) resources in the banks at like what is it now…a 1% fixed interest rate while you can have 100 200 300% …?

So, we are led to believe that it is nobody’s fault really that we are this knee-deep into the financial doghouse, its all our combined faults. Yeah, wasn’t that the story we are meant to swallow from our media,…right?

For me, there is only one bank I’d trust my money too and right now that’s either called, the Toronto Exchange, the Venture Exchange or Orko Silver. Ain’t no banker taking my expandable money anymore and using it to squander away on shady derivatives, blown up triple-A credit rated companies not worth the toilet paper to wipe one’s behind with.
Tough talk I know, but if you talk the talk you gotta walk the walk and I talk the talk and most certainly walk the walk so if you’re gonna do the walk with me then lets do the talk also.

* meaning loose change so to speak, not next months rent, not your children’s college fund, no borrowed money,…