Lets start with a brief summary from the last couple of days, OK? So, we had an RSI indicator turning down on the 18th of September, after that we had our Japanese candlestick pattern called a Doji which was put on the boards on the 22nd of September, we’ve had yesterday’s closing in the red as the start of the confirmation of the downtrend together with a little tap on the 10 MA line….and today we’ve had an increase in volume and NO, those were not buyers and we’re looking at a downwards bending MACD indicator. 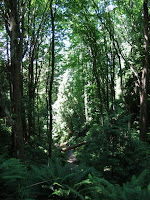 If I were in the woods right now I’d be more concerned about bears on the prowl than I would be about stampeding bulls. YeOldGoldNugget looks around and comes to the conclusion he ain’t in Kansas no more! Come to think of it, this looks vaguely familiar, lots of green thingies, large brown skyscrapers with lots of green thingies on them, ground feels kinda squishy and moldy,…definitely not in Kansas any more! At least I don’t have to deal with them stampeding bulls anymore which they had over there. So, that settles it, we’re in the woods, but not just yet out of the woods, if you’re following me. So, no more bulls to trample me, that’s a good thing right? I wish! No, usually with my kind of luck getting rid of the bulls I just might have gotten in an even worse predicament. Anyone know if there are any bears lurking around Vancouver woods?

For those who didn’t sharpen their pencils today, the above written piece was me explaining how I think we now have a definite confirmation of a stock looking at a consolidation.

So, imagine yourself asking that same old same old question, like the one you ask when your wife trashed her car once again

how much is this gonna cost me?

Translated to the stock market, how low is this gonna go.

Well, take a look at the chart and in particular the wide green translucent bar I placed on the chart at the 0.85 level. Now honestly and I am really really serious here and yes, I do get those questions so again, NO, I do not have a hat filled with little pieces of paper from which I let my wife pick one each day. Please, some credit 🙂

Well, the 0.85 didn’t like a rabbit get pulled out of some hat. This time it came out of a lot of earlier resistances and supports. Not only that, if I draw some Fibonacci lines from the low to the high I get the exact same support. Coincidence, hardly!

So, if our precious Orko Silver is to do some much needed consolidation then I’m looking at 0.85 as a bottom from which to gain momentum and the start of the next upleg for Orko looking to make a break above 1.00 and 1.10. Myself I’m looking at more bullish values cause I also think that when we get to that point silver will have already started its similar next leg up. Looking at the chart of gold I can see a possible low of 960. Not saying it will go down but if its going down it will probably head to those regions before you can expect renewed interest. The same is true for silver.

The writer does need to point out that we still did not really close far under 0.90 so technically, this stock is still in an uptrend. So to say we are 100% looking at a day in the red tomorrow,…I’d say uh uh!

Then one last thing I wanted to show you.

Take a look at the end of March 2009. What you see there is not just any ordinary Doji, that’s a Long Legged Doji and if found on a stock which has seen an uptrend, not a very pretty picture I tell you. If Orko Silver was trading on the Tokyo Stock Exchange and we were standing in the TSE trading halls and traders would see a Doji like that, they would be chanting, Doji Doji Doji Doji Doji Doji,…and the stock would drop from the ensued selling.

Thanks for reading, hope you enjoyed and see you tomorrow. Take care and prosper.

Source : picture Vancouver woods. My thanks go to the High Energy Physics Group of the University of Illinois.