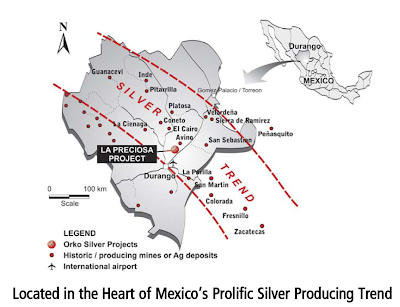 *Estimated at a 60 to 1 Silver/Gold ratio with metallurgical recoveries and net smelter returns assumed to be 100%.

On April 14th, 2009 Pan American Silver Corp. and Orko Silver announced that
they have agreed to form a joint venture to develop the La Preciosa project.
Pan American will contribute its demonstrated mine development expertise, as
well as 100% of the funds necessary to develop and construct an operating mine, in consideration for a 55% interest in the joint venture. Orko Silver retains a 45% interest fully carried to production.

Key aspects to the joint venture and the development strategy for La Preciosa
include:

Orko Silver’s shareholders will benefit from the financial capacity and extensive mine development expertise that Pan American brings to the joint venture as well as retain the upside potential for the discovery of additional resources from Orko Silver’s exploration team.

Going forward, the Joint Venture partners have already begun releasing results
from the 2009 exploration program which will include trenching, detailed
metallurgical tests as well as more than 35,000m of diamond drilling both in
the known deposit but also in the exploration targets previously identified by
Orko Silver. 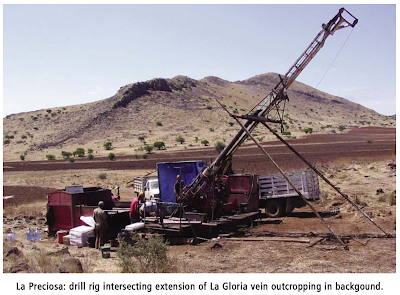