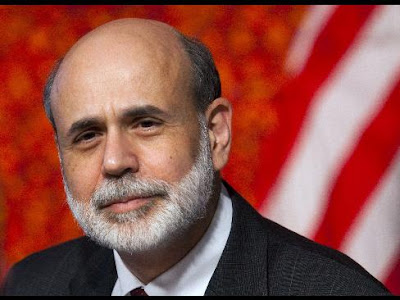 Oct. 21 (Bloomberg) — The Federal Reserve said its 12 district banks saw “stabilization or modest improvements” in many areas of the economy, led by housing and manufacturing, while all regions reported a weak or declining commercial real estate market.

Fed banks observed “little or no” price pressures, the Fed said today in its Beige Book business survey, published two weeks before officials meet to set monetary policy. Demand for bank loans was “weak or declining,” and many districts reported a “further erosion of credit quality.”

Read the rest of the article at Bloomberg.com

Now, just look at that picture. Who in their right minds could ever doubt such an honest face? Please…the thought alone could leave people wondering about the state of your being and whether you need to seek some professional assistance.

I mean, the picture has it all! It has the American flag in the background which suggests he is a true American patriot willing to put it all on the line for every hard working American. You BET YA!

He also has the beard which suggests authority. Besides that, he has that frown eyebrow smile look so as to suggest you can put your trust and faith in him.

If you haven’t seen this clip, then I strongly suggest you take five minutes and watch this. Better yet, watch it several times. First time just listen to what is said, second time start watching in more detail. So that is what its called, central bank liquidity swaps, starting somewhere from the end of 2007 for $24 billion to $553 billion dollars to the end of 2008. The US dollar nominal exchange rate shows a 20% increase at the same time the first ‘swaps’ started.

Just a coincidence! It’s also just a coincidence that these ‘swaps’ have never ever happened before that time. So starting end 2007 was the very first time that so called liquidity swaps have taken place where money is siphoned off to foreign European central banks. Hm?

About the big billion numbers, do allow me to assist you in the visualization process. This next picture shows just fifteen billion dollars. This pile of money is 60 feet high, 150 feet long, and 62½ feet deep. Quite impressive is it not? 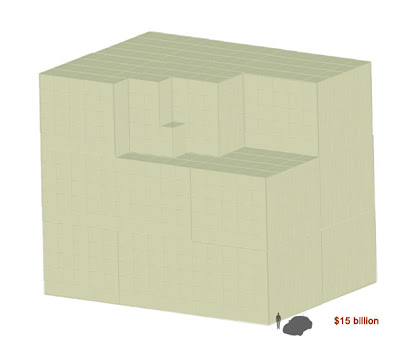 But wait till you see, or at least try to picture in your mind what $553 billion dollars looks like, also watch car and person, the next image tries to show you how that works for two-hundred-seventy-two billion dollars. This pile is 250 feet long, and 125 feet wide. It’s 320 feet high at the tallest point, which is as tall as St. Steven’s Tower, the clock tower that houses Big Ben at Parliament, in London, England. So pile two Big Ben’s on top of each other and you kinda know what we’re talking about height wise to get from this to the $553 billion one. 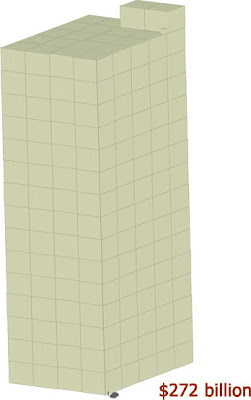 So yeah, I don’t think its really wise to be buying gold or silver now! In fact, I’d strongly advice you NOT to buy gold and NOT to buy silver. According to Ben, everything is going to be alright! Trust me or rather…trust Ben!

So, about those credit liquidity swaps, you know, that guy everybody knows from the office, the one who’s only tasks during office hours are :

just goes to show you, truth is not stranger than fiction and all is not as it is portrayed. Now please don’t read into this that Mr. Bernanke is worthless cause he is a very smart chap and I respect intelligence. Just trying to say that what someone says is not necessarily the case, no matter what the source is.

So then again, maybe buying gold isn’t such a bad idea.

Images of dollars taken from 87billion.com/