With my analysis on gold completed yesterday I couldn’t let one on silver wait for all that long,…now could I?

On the chart you will see silver seems to follow similar trend lines than gold does. Also, silver has like gold completed a similar up and down pattern where the most recent correction which started early December made silver drop all the way to the second trend line. As of early January after hitting this ‘maybe’ bottom, silver has already made a run and break for one trend line and is now building momentum to break the next one.

MACD above the center line which is positive, MACD due to the correction a little bit bending downwards but the histogram doesn’t show a real strong decline so everything is still possible. The negative divergence is now hopefully out of the woodwork and we can now continue our longer term target which lies past $21.00.

Also from the chart you can see, silver has also made it to the upper trend line and has since that moment fallen back to the second one where it found support on two different occasions. One is a bounce with a short up and then a re-test of the trend line with more buyers and investors getting interested or getting in.

And so from early January, the 5th to be more specific silver also started its up again and broke the third trend line and is now trading somewhere between the fourth and third.

At the moment it has found support on the 10 MA and is actually resting just above it.

Since I see the pattern silver has followed and the points we have reached I therefore have to conclude that there is more upside than there is downside at the moment. Just keep a close eye on silver keeping above this third trend line and by that also above $18.00.

Like I said in my analysis on gold article goes sorta the same for silver. If silver decides to break the fourth trend line on that chart than that would open up the way to very bullish numbers which the author himself dare not speak aloud…

On the daily to summarize, not all indicators are in prime position but they are in the correct position for an definite up to resume!

We have support from the 10 MA at the moment, if that goes, look out for support from the $18.00 level and from the 50 MA at $17.94. Though I still think we need to look up from here but anything can happen right? 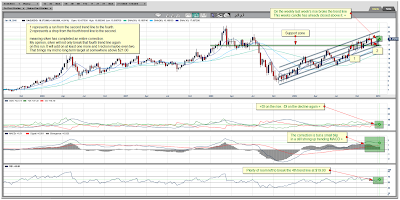 Goes to show, more leverage in silver than there is in gold. On the downside, you have to take an extra 1.68% loss on the correction. But seeing you gain 21.35% on the waves up I’d say that would be an easy pill to swallow. NO?

All in all, the weekly chart looks very very strong and therefor I must say that getting over $19.00 will not take that very long,…in my humble opinion then.

Silver Looks Set to Start the Year off Strong!