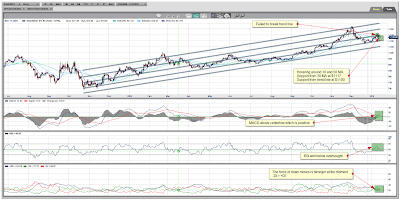 Where are we now with gold? Very good question! Very hard to answer short term while longer term should be a bit easier.

OK, let me start as usual with the daily chart. From the chart I can see we have hit the low of $1074.30 on December the 22nd. That means gold‘s current bottom at $1074.30 coincides almost with the Winter Solstice which occurs exactly when the earth’s axial tilt is farthest away from the sun. What we northerners would call the shortest day in the year.

Just a coincidence? Or could it perhaps be that all investors of the northern hemisphere were all tucked up by a warm fireplace with a nice cup of hot chocolate milk, with their laptop or computer on their 26 inch widescreen monitors in prime position to buy a decent and solid bottom for gold at $1075?

Well I don’t know? It sounded plausible? I’m an optimistic fellow so what nicer explanation than this one, is what I think.

What’s clear to me should be clear to you. Take a look at the chart and you will see that the trend lines I use with my gold chart DO act as support. I don’t have the link ready but I did an article previously in which I indicated which trend lines gold seems to be following. Try and look in my archives for it.

Anyway, gold has bounced and danced on this line for several days as you can see from the chart. Every time finding support at it. Take a look, I count at least 6 days that gold took its peek down the abyss and decided….nope….NOT TODAY! Gold did that for 5 more times before it finally said…what the heck am I doing staring at this abyss all the time. Up is where I need to go, not down!

Also, coincidentally, in East Asian culture, calendars divide a year into 24 solar terms. Their term for the winter’s extreme is Dōngzhì or Tōji (Chinese and Japanese) and is the 22nd solar term and marks the winter solstice. It begins when the Sun reaches the celestial longitude of 270° (around December 22 ) and ends when the Sun reaches the longitude of 285° (around January 5).

Maybe that timeframe 22nd December to the 5th of January was gold bottoming out? Who knows. Guess time will tell.

Perhaps its meaningless but I found it interesting nonetheless, especially considering the relation China has with gold.

Further with the chart, gold started its up move again on January the 5th but failed to break the trend line and close above it. We are at the moment at $1130 and sorta hovering a little below the third trend line and at the 10 and 50 Moving Average.

If that third trend line breaks, then you can forget about any doomsday scenario about gold heading back to a $1000 to find support. Ain’t gonna happen!

Not only that, breaking that third trend line also coincides with the 50% Fibonacci Retracement on the daily. That could give gold an extra boost cause certain investors use these indicators to determine their entries or exits.

What can we see more from the daily,…we have an MACD or Moving Average Convergence Divergence indicator which still is right where at least I want it to be…that is, if your long into gold I mean. RSI is below the overbought zone and has plenty of room to the upside should gold decide to make a break for it…notice the pun.

All in all, yes we had the drop, it was not very pleasant. But, if you learn to profit from these little corrections in gold then you will be all the happier. There is profits to be made in a down trending market as there are in an up trending market.

Now, I have to tell you, YeOldGoldNugget NEVER ever shorts a stock. When I enter a stock I pay what needs to be paid and I stick to my guns until either the chart or my stop-loss tells me otherwise.

Also, there are occasions where I will alter my stop loss and place it either a little higher or lower depending on what I see in the charts. Also, don’t take this as an advice to just plainly ignore your initial stop loss just to stay in a trade for the heck of staying in the trade. Only alter it after having investigated the chart, maybe there is some support you missed. Maybe in the 5-minute chart, daily, the weekly,…. 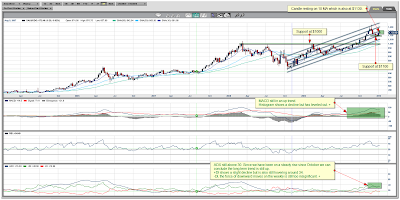 What does this weekly chart tell us about that trend? It tells me that trend is still clearly UP.

All indicators are not in their prime position but they are all in the needed position which would confirm an UP trend. MACD for instance is still steadily trading above the center line but with a little less performance because of the drop we had.

That very same force is still controlling this market, it is still driving this market and you can bet your bottom dollar that that very same white knight is still around ready to awe investors with its tremendous up force. I tell you this now way ahead of the actual event so you can hold me to it when it happens but if gold breaks $1230 again then what will happen will leave investor’s jaw bones dropping flat down on the floor.

I think that pretty much says enough what I think Gold‘s direction is for 2010.

What happens to Gold now?