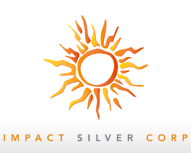 IMPACT Silver Corp. (“IMPACT”) is pleased to provide a summary of its 2009 new mine development and exploration activities at the Royal Mines of Zacualpan Silver District (“Zacualpan”) and the adjacent Mamatla Mineral District (“Mamatla”) in central Mexico. The Zacualpan and Mamatla Districts consist of a large combined 472-square-kilometer package of 100% owned mineral concessions with wholly-owned operating mines and a processing plant rated at 500 tonnes-per-day. The continued success of the exploration and development work contributed to the ongoing expansion of mining operations and mineral resources. Information on mine production will follow later with release of final 2009 financial statements.

In November 2009, IMPACT announced the first NI43-101-compliant mineral resource estimates for the Capire and Aurora 1 Zones located in the Mamatla Mineral District. The adjacent Capire-Aurora 1 Deposits are currently in the mine planning and economic assessment stage. If a positive production decision is made, they would represent IMPACT’s sixth mining operation in the Zacualpan and Mamatla Districts. They are located 16 kilometers southwest of IMPACT’s active mining and processing operations at Zacualpan. Both zones remain open for expansion. Infill and expansion drilling on both zones is now in progress.

Mine planning, metallurgical studies and economic studies are now underway to evaluate the production potential of the Capire and Aurora 1 Zones. The orientation and shallow depth from surface of the mineralization indicates potential for open pit mining of at least a portion of the zones. Should a production decision be made on Capire and Aurora 1, it is anticipated that a new processing plant would be built on site to create a second production centre on IMPACT’s large 472-square-kilometer mineral holdings in the region.

NEW MINE DEVELOPMENT AT NOCHE BUENA

The newest mine development project added to IMPACT’s stable of operating mines is the Noche Buena Mine. Noche Buena will be the third new mine that has been taken from discovery to production by IMPACT’s technical team since 2004. From the time first assays were received from the discovery drill hole (January 2009) to projected commercial production (April, 2010), a short 15 months will have elapsed. Initial production will commence at 80 tonnes per day and projected to be increased incrementally. This ability to fast track new mines into production is a cornerstone of IMPACT’s plan to rapidly grow silver production in the Zacualpan-Mamatla Districts.

To date, drilling has defined the upper levels of the Noche Buena Zone over a strike length of 300 meters, a depth of 100 meters and an average width of 3 meters. The zone remains open for expansion. Exploration on this northerly trending, west dipping Silver-Gold breccia zone has consisted of holes drilled on a 50-meter by 50-meter drill pattern designed to systematically explore and build tonnage. Drill results to date are as follows: 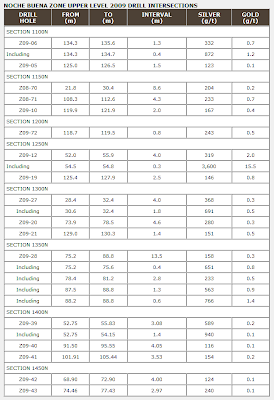 Since 2004, IMPACT has been reporting results from a large number of old mines and prospects in the Zacualpan and Mamatla Districts. To organize the results of this extensive field work, historical information and assays, IMPACT is compiling a computer Geographic Information System (“GIS”) database encompassing all past mining and exploration data in the districts. To date, over 1,600 old mine workings and prospects representing almost 500 years of mining history in the districts, have been located in the field and entered into the GIS database. In 2009, the GIS database reached a critical mass of information and is now the main engine for generating and prioritizing drill targets.

In 2009, IMPACT completed a Phase One drill program in the Santa Lucia area located 4 kilometers southeast of the Guadalupe processing plant. Detailed geological mapping, soil sampling and rock sampling earlier in the year outlined a variety of high-grade silver drill targets consisting of old mine workings and outcropping veins along a northwesterly trending structural corridor that is coincident with a strong silver-gold-lead-zinc soil geochemistry anomaly. Phase One drilling tested a variety of these targets with drill holes spaced at 50-meter intervals to determine the focus for additional drilling. Summarized below are results from some of the initial drill holes: 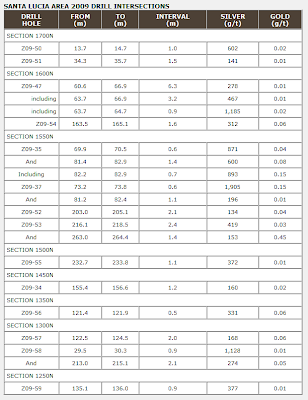 A Phase Two drill program in 2010 will continue 50-meter spaced drilling on Section 1600N at depth where the silver-bearing structures are becoming better defined and to the south of Section 1250N, where several previously unknown old mine workings may be continuous with the famous Chontalpan Mine located 2 kilometers to the southeast. Historic reports describe the Chontalpan Mine as a large, very high grade silver producer dating back to at least the 1760s.

This main northeasterly dipping Gold-Silver Horqueta Vein has been traced in trenches on surface for 1.9 kilometers and an additional series of silver-bearing veins have been found 50 meters to the west. Surface samples from hand trenching of the Horqueta Vein over a 550-meter length have returned values up to 639 g/t silver and 0.5 g/t gold over a 0.9-meter width. The Horqueta Vein mineralization is open for expansion to the north.

Las Aguilas Zone is located 4.2 kilometers west of IMPACT’s Guadalupe processing plant. It is host to a series of southwesterly dipping veins that are partially exposed in historic underground workings and in surface outcrops where rock chip samples returned up to 287g/t silver and 3.25 g/t gold. Initial drill holes at Las Aguilas returned the following values:

Both of these holes at Las Aguilas were drilled on Section 2050N, with Hole Z09-08 undercutting Hole Z09-07 by 50 meters. Upon review of the geological cross sections, it is evident that Hole Z09 08 only intersected the first vein and should have been drilled deeper. Additional drilling is planned.

IMPACT employs well trained field crews dedicated to early stage exploration throughout the District. These crews have been sampling some of the 1,600+ old mine workings and prospects in the Zacualpan and Mamatla Districts, trenching areas of mineralization and carrying out extensive soil sampling on 100-meter by 25-meter grids. During 2009, this work has been successful in defining high priority targets in several areas that will be drilled in 2010.

IMPACT’s exploration work in the Zacualpan and Mamatla Districts has been very successful in recent years. IMPACT staff has put two new mines (Chivo and San Ramon/Chaparita) into production over the past five years along with various satellite deposits and a third mine at Noche Buena is now under construction. The Capire and Aurora 1 Zones in the Mamatla District are now in the economic assessment and metallurgical testing stages leading toward a decision on production.

During 2009, exploration focused on generating near-term production targets continued at a high level. Plans for 2010 are to expand the exploration budget and drilling by 50% in order to put some of the other 1,600+ compiled prospects in the Zacualpan and Mamatla Districts on a faster track to potential production, and to build mineral inventories for mining.

With a track record of successful exploration, rapid mine development and more than 1,600 old mine workings, most not yet drill tested, IMPACT’s long term vision sees the potential for establishment of multiple processing plants throughout the two districts, each fed by multiple mines.

George Gorzynski, P. Eng., Vice President, Exploration and Director of IMPACT Silver, and a Qualified Person under the meaning of Canadian National Instrument 43-101 is responsible for the technical information in this news release. The Capire and Aurora 1 mineral resource estimates published in this news release were taken from a technical report (posted on www.sedar.com) by Claus G. Wiese. P.Eng. of I-Cubed LLC, an independent professional engineer.

IMPACT Silver Corp. is a profitable silver-focused mining and exploration company operating in Mexico with a producing silver operation at the Royal Mines of Zacualpan, the adjacent 200-square-kilometer advanced Mamatla Mineral District and a portfolio of projects with an option on a producing mill at Zacatecas. Additional information including maps of IMPACT’s projects can be found on the company website at www.IMPACTSilver.com.

On behalf of the Directors of IMPACT Silver Corp.,

The TSX Venture Exchange does not accept responsibility for the adequacy or accuracy of this news release.

You can find their News Releases page by following the link.