OK, what do we have on the chart?

Well, since the end of August 2009 this stock seems to have sprung alive. On September the 3th, a couple days after Otis Gold announces the granting of stock options we see a first big increase in volume to a then whopping 658K shares traded which is quite a lot for Otis at that time.

From that day on volume has to be called fairly average with some very good volumes early on, some cool-down periods and since the last couple of days we seem to be on the increase again. Any which way you look at it, Otis Gold Corp. isn’t a stock where, after you buy shares, you can’t seem to get rid of them. Nope. This stock is well traded so there will be no problem to either buy or sell your shares.

Doesn’t mean Otis Gold Corp. isn’t well on its way to get out of them works.

Not only are most indicators pointing in the direction I would like to see them pointing…Otis also seems to be getting out of the long down-ward sloping trend line. Call it falling wedge or whatever. When Otis Gold Corp. crosses above that line technically speaking this stock has broken out of the downward trend pattern from the last couple of months.

Sure, I know it is just a line but I am not the only person that looks at these charts and probably not the only one who will draw the same conclusions and act on them.

However,…looking at Otis their last news release, Otis Discovers Significant CSAMT Anomalies Underlying Kilgores Dog Bone Ridge Gold Target Area, who knows…when they can confirm something as to whats in the ground, then those with an entry around these levels will be well rewarded I’m sure cause we already have a high of $0.80 on the boards. Coupled with a few good days of trading to get out of this wedge and the market will probably make Otis do a re-test on that very same trend line and instead of breaking down through it, instead find support on it.

That’s one possible scenario which can and do happen after a break-out from a certain channel.

I do not make these things up myself you know, that is just the workings of the market and your task to spot them…or rather in this case…my task.

No weekly necessary, that is no different from the daily. We are just waiting for a break from the trend line and a re-test.

When that has happened it will provide the safest entry to those interested in a venture on the Venture with Otis Gold Corp.

Anything below $0.45 would be considered bad of course. Due diligence everyone! Don’t forget, the market is not just a chart and indicators, there is still a company and real people behind most everything so take everything into account before investing. That goes for Otis Gold and that goes for basically every other stock out there on the market.

Disclosure : I do not own shares in Otis Gold Corp. 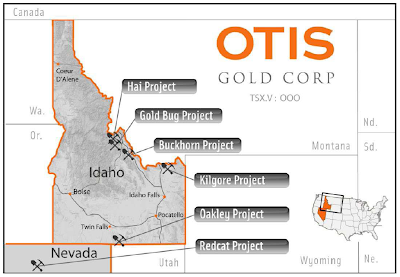