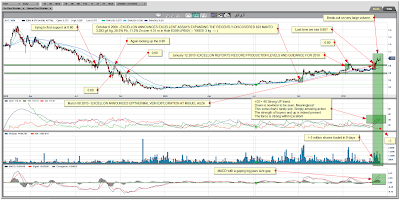 What do we have on the chart today? This is a junior silver explorer/producer with its properties in Mexico. I’ll leave it to Excellon themselves to do the short introduction before I get on with the chart :

Excellon Resources Inc. (TSX: EXN), a mineral resource company operating in Durango and Zacatecas States, Mexico, is committed to building value through production, expansion and discovery. The Company is producing silver, lead and zinc ore from high-grade manto deposits on its Platosa Property, strategically located in the middle of the Mexican silver belt. It processes this ore at its concentrator in the town of Miguel Auza 220 km south of the mine and produces silver-lead and silver-zinc concentrates, which are sold under the terms of a long-term contract to an international trader.

Well, like pretty much if not ALL stocks, Excellon Resources underwent the same heavy drop due to the crisis as did the broader market. Ever since hitting a low of $0.135 on December the 23th, 2008 the stock has been steadily climbing back upwards. The volume on the days following that low has to be called pretty decent and solid. In the early months a bit lower but ever since May 28, 2009 it has jumped up a notch.

So, since May 28, average volume has doubled!

It wasn’t too bad before then but it only became better so nobody is complaining here. So far the story is looking good. On we go…let us see if this is a story worth telling?

Well, honestly, I could write up an entire story but for this time I won’t bother you with too much details besides telling you that every news release since that time has made me a stronger believer of this stock and the tremendous potential of those two projects they are working on :

Excellon is continuing its surface and underground exploration and development program to locate both additional high-grade mineralization near the Platosa Mine, and a near-source, large tonnage major carbonate replacement deposit (“CRD”) system in the Mexican CRD Belt. These deposits, together with major vein systems, support the development of most of the large Mexican underground silver and base metal mines. The Platosa property is strategically located along the geological trend of these large deposits.

The Platosa Mine area is largely overburden covered and exploration into 2009 relied on a combination of Geology, Natural Source Audio Magneto Tellurics (“NSAMT”) geophysics, soil geochemical surveys, and biogeochemical surveys. These methods were instrumentalin the discovery of the Guadalupe, Guadalupe South, Rodilla and NE-1 mantos. A 2008 ground gravity survey outlined promising drill targets and more surveying may be undertaken. In addition a recently reinterpreted 2008 induced polarization (“IP”) survey shows promise as a targeting tool and targets are being tested in 2010.

The Miguel Auza property was first explored by the Spaniards in the 1500s and is dotted with historic workings on precious and base metals-bearing epithermal vein systems. Silver Eagle Mines Inc., since acquired by Excellon, carried out underground exploration and mined a portion of the Calvario Vein system between 2007 and late 2008 when the mine and mill were placed on care and maintenance. Excellon has processed Platosa ore at Miguel Auza since March 2009 and a preliminary exploration program to determine the most favourable areas for exploration drilling programs began in September 2009.

The large Miguel Auza Property has high potential for the discovery and exploitation of additional epithermal Ag, (Au), Pb and Zn veins of a style similar to those exploited profitably for decades in the Fresnillo camp 150 km to the south and elsewhere in the prolific Mexican Silver Belt. There is also developing evidence of carbonate replacement deposit (CRD) potential.

Despite the long mining history of the camp very little exploration has been carried out and the historic data record is almost non-existent. During its tenure of the property Silver Eagle focused on developing the Calvario Vein system and only began a concentrated review of the potential of the overall property shortly before ceasing mining activities in December 2008. Several additional vein systems are known including those exploited by the Spaniards in the 1500s and the property remains largely under-explored. The Company began an initial exploration program in September 2009.  The goal of this Phase 1 program is to develop drill targets for a subsequent program.

The Phase 1 program has three areas of focus as noted below, but will be flexible and resources will be reallocated as areas of significant potential emerge. These areas are as follows:

1. Calvario Veins – These veins were exploited historically and by Silver Eagle in 2007 and 2008. There is a suggestion that they represent the distal portion of a CRD system to be found at depth or on adjacent, unexplored portions of the system. The program will examine the potential to develop economic tonnages of Ag, Pb, Zn mineralization along the known veins and their possible extensions into less explored adjacent areas. It is highly likely that a drilling program will be required to fully evaluate this possibility.

2. North Veins – These high-grade Ag veins were exploited by the Spaniards who stopped exploitation when they reached the water table since no dewatering technology was available at that time. Surface mapping and sampling are being carried out.

3. Regional Exploration – Basic mapping and sampling are being carried out to more fully understand the potential of the numerous known, but only sporadically explored vein systems and to uncover additional ones.

The three sub-programs are being run in parallel and it is anticipated they will be complete in the early spring of 2010. So yes, if I read strange stories about elephants walking amongst the Mexican plains and valleys then yes by golly I am a believer of that faith! If you have absolutely no clue what I am going on about then I wouldn’t worry too much. If it decides to do a stampede and you are a holder of this stock you’ll soon know 😉

And I have to warn my readers, I have some vested interest in Excellon seeing as I alerted Trendtrader to this stock some time ago so he invested some money on my behalf in Excellon. So if Excellon does well, then that is also good for my shares.

So, do I write this to financially improve my situation? Nope! You would be wrong in that assumption seeing as I am low into this stock though that does not mean I would not welcome a rise…if that rise were to be based on solid results and news. No, the actual reason of this article is because I was contacted by a friend on stockhouse and he asked me to take a look at Excellon. He had no idea I was holding shares too 🙂

Kind of funny cause I know him from another junior company he and I are holding and now it turns out we’re also in Excellon. Well. Good pickings.

So, please do not take my visually inspiring writing as a reason to buy this stock. We (current Excellon investors) are riding this puppy for a long while now so we can take the little bumps here and there. You probably cannot if you are a new investor or new to investing. Whichever of the two you are.

I am not about pumping a stock, only trying to write about good and still under the radar stocks. I have written about Excellon before on this site but back then I wrote that they first had to prove themselves. Well, I’m sorry for not getting back to that but they have long since proven themselves.

With plenty of potential yet to come, a chart that looks like that and the buying that is going on the last couple of weeks and months. I’d definitely say there is at least one elephant on the loose driving up the interest in Excellon cause I know there is a lot of interest in their property.

Probably after PDAC lots of stories did their rounds which probably by know have reached every nook and cranny of every private investors office, hedge fund managers, brokers, banker or what not.

I tell you one thing. I know a good story when I see one. Excellon is in my opinion one of them! And I’m sorry I have to disagree a small bit about the elephant,…I really do think its Mammoth size but I’m not arguing about details. Lets keep it peaceful alright?

To each to do their own research and due diligence on Excellon. Don’t ever just make a purchase after reading any story you read on the internet. You worked hard for that money, do try to spend some of those hours you spent earning that money  into some research before spending that very same money!