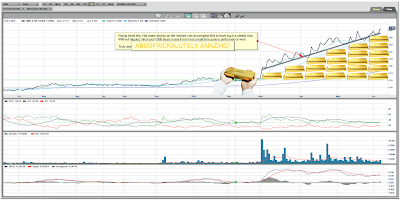 I always start my article by posting the charts so new investors can see what we have on there and whether it is any good…that which is on the charts then that is.

So, is it any good? Please continue reading and make up your own mind or allow me to help you a little in that process. The first chart is the line chart which I always use to draw my trend lines. On this one you can see a very strong upward trending trend line that has not been technically broken since end of February 2010, EVER! It has been a steady and strong run up to where we are now. I have to look very VERY hard to find juniors on the venture who can accomplish such a feat let alone besting GBB in such action.

Therefor I can say that Gold Bullion Development Corp. is amongst the few on the venture who have such a strong trend line. There are other stocks of course but I doubt they have as much Blue Sky potential as Gold Bullion has. One also has to take into account that this trend line has been followed since February 2010 and most of it is on heavy volumes and heavy buying and without dipping too much.

So, I think that qualifies Gold Bullion Development Corp. to apply to Webster Dictionary to include a new word…ABSOFRICKALUTELY!

That can then be used to give extra value to or address such things that outperform beyond anyone’s comprehension. I’ll go ahead and take my authors liberty to compile a draft version for Gold Bullion to send, saves them the time  :

1 : in an absofrickalute manner or condition —often used as an intensive
2 : with respect to absofrickalute values
3 : to excel beyond any reasonable measure
4 : to perform as excellent as Gold Bullion Development Corp.

I don’t think this ever went far below +90 since the end of February 2010. This is merely an indication mind you, I don’t ever follow trend triangles LOL…as if. Never did but they are useful, can’t deny that. However, I have no need for them but for new investors they are priceless. 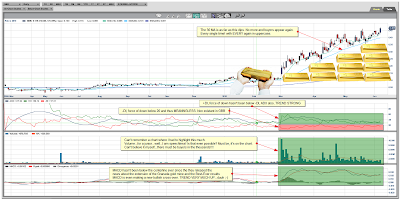 The daily candlestick chart then,…well what can I say. Gold has been handed out end of February 2010 and it hasn’t stopped doing that and is still doing that up until now.

Do tell me one thing as one investor to another investor. How many stocks do YOU know that have been on a steady rise for months on end with strong volumes without dipping….EVER? I have a funny suspicion however that my mailbox will remain silent and empty! Maybe I will even have to go out of my way to check my hoster to see if any problems have arisen with my mail client only to later find out that everything was still working perfectly.

I’ll go over the indicators now :

Description : The Average Directional Index can determine trend strength regardless of the market direction. This non-directional oscillator is based on a range of 1 to 100 (although movements over 60 are rare). If the line is under the 20 mark, the trend is considered to be weak. If the line is above the 40 mark, the trend is considered to be strong. The ADX line is built on the results of two separate technical indicators, the +DI (force of up-moves) and the –DI (force of the down-moves). The default for this study is 14 periods which takes into the consideration the measurements of the +DI and –DI for the last 14 periods. 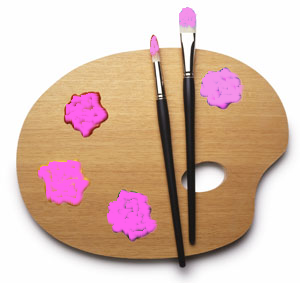 Looking at the chart you can clearly see that the red zone I’ve highlighted is the -DI and that hasn’t seen numbers above 20 for months on end. Hasn’t been existent since February 2010 and with that we can with all certainty conclude that Gold Bullion Development Corp. has absofrickalutely NO down force present. NONE AT ALL. I repeat for those hard of reading or hearing….NO DOWNFORCE PRESENT.

+DI has been trading above 30 and ADX also so from the definition we learn and conclude that the FORCE IS STRONG in Gold Bullion Development Corp. Yoda couldn’t have said it any better so those are his words I’ve stolen.

Can’t very well paint you a gloomy picture when only colors the ADX chart provides are pink, if you follow me in my logic then. Well, maybe there are artists out there who can but for a gloomy picture I would use dark colors like black, gray and such things. Seeing as Gold Bullion’s ADX painters palette in this case only holds pink…you will get a very rose-colored picture!

Before I get started on volume I would like to ask everyone to brace themselves before I pile the next big whopper on you. Ask your spouse or what not to hold you, if you don’t have one then use some weights or something to keep you steadfast….everyone ready?

From February till where we are today…over a whopping 140 million shares have changed hands. Yes, you read that right…over 140 million and I am in repeat mode cause I myself am doing the math on this for the first time. To those who don’t understand…YES…we are indeed still talking about venture junior material here. Sounds more to me like a bullish blue chip stock trading on the TSX…and even then it would have to compete really hard to match GBB’s performance. There really is no match. I’d stick with GBB.

The first week of march saw a whopping 25 million shares traded and that trend has on and off continued with millions of shares traded every week.

Just today we hit over 1 million shares again. Talk about a show-off. This one makes some TSX listed stocks run from embarrassment with plenty of red on their blushing cheeks.

Volume…how can it be any thing else then maximum points +++++

A little description first for investors unknown to MACD (Moving Average Convergence Divergence) is a trend following momentum indicator that shows the relationship between two moving averages of price. The standard setting for slow, fast and signal periods are set to 26, 12 and 9, respectively. However, you can change these period settings by sliding the triangle up and down the setting scale.

The MACD can also help identify overbought / oversold conditions. When the shorter MA moves quickly away from the longer MA, it may signify that the security is overextending and will retrace back to normal levels.

So, in knowing this and looking again at the chart we can clearly see that since the end of February we haven’t been below the center line. Not a small feat and any investor who knows MACD will know that that is one HECK of a bullish MACD diagram we have on the charts.

It’s even doing another bullish cross-over which could bring us even further up!

To conclude,…I find it very hard to find any negative if any on the chart. Well,…chart wise there isn’t a negative thing to be said about Gold Bullion Development Corp. Any technical analyst who claims otherwise should find another method of employment or hobby cause he’s probably reading this one upside down or looking at it through a reverse mirror?

One other hint,…GBB only falls back to the 30 MA and never dips below always finding buyers there. Amazing…simply amazing. Doing this chart truly was a great pleasure and I can honestly say I have never seen or done a chart like GBB’s one. I’ve been in bullish stocks that is fact but a performance like GBB’s I haven’t spotted. I am absofrickalutely honest in this claim.

Can’t find that statement just now but will look for it. If anyone finds it please do send it to me. I know I read that somewhere. The first miner who will pay its investors in real gold. If you needed any reason to hold then that might be the best of reasons I can muster up. No kidding!

So,…to answer the title of this article…is it really worthy of its name? Well, what do you think? I think that is a rhetorical question.

YeOldGoldNugget will remain long on Gold Bullion and will wish all other investors the best of luck and hoping we hit the highest of grades and PLENTY of them!