Trying to predict short term direction is notoriously difficult, especially in the volatile metals market, but I’m going to take a stab at it today.

First off let me start with the big picture: For almost a year now I’ve been saying that the inflation that’s been stored in the stock market for the last three years is eventually going to start leaking into the commodity markets. You can see in the next chart that process has begun as smart money investors begin to move capital out of an overvalued and overextended stock market that is destined to top some time during the first half of this year, and into undervalued commodity markets where they are getting a better return on their investment. 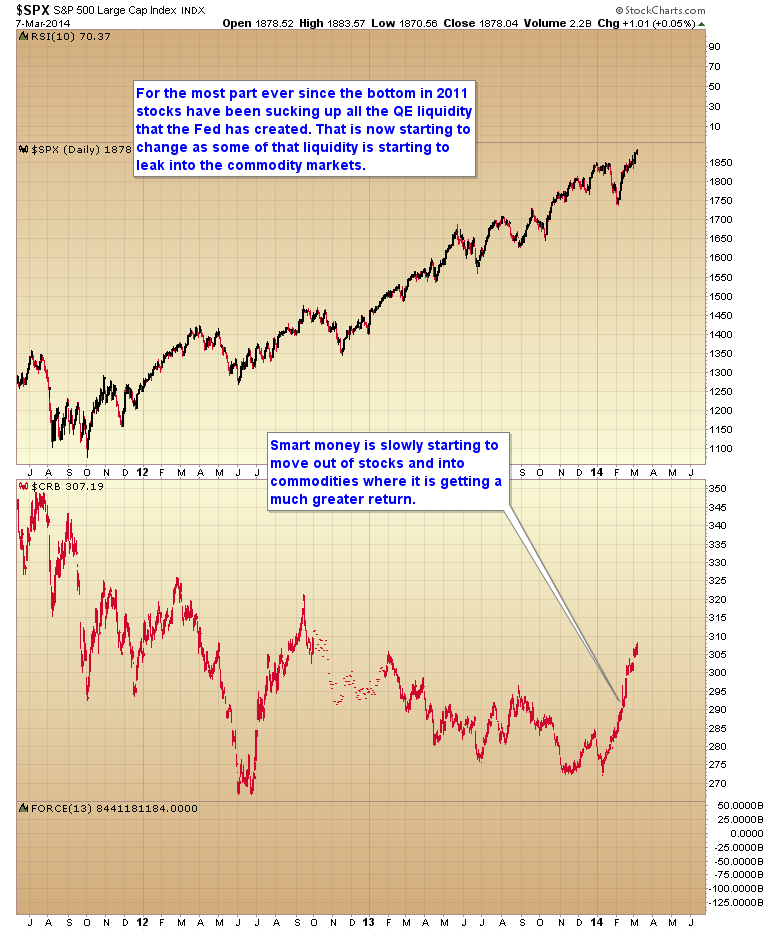 These kind of gains are going to draw more and more capital away from the stock market, at least until commodities form an intermediate top (probably around the first or second week of April). Yes this kind of explosive rally is going to have some kind of corrective move later this spring, but I don’t think the rally is done just yet. I’m looking for an acceleration of the move in March to at least test the 2012 high at 320 on the CRB index before commodities enter a multiweek correction/consolidation phase in April and May. 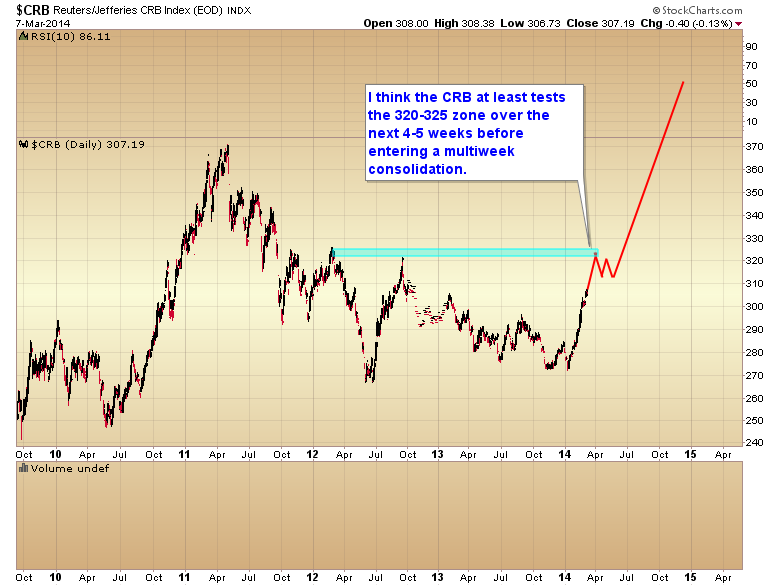 Next week has the potential to begin this acceleration phase if a couple of things fall into place. First off I think we need to see the dollar continue down into its next daily cycle low, potentially on the March 19 FOMC meeting.

I’ve also taken the liberty of extrapolating on the chart my expectations for the dollar index over the next month as it moves into an intermediate degree bottom.

If I’m right about the next week and a half, then I’m looking for the dollar to drop down and test the October low between now and March 19. As that level is a major support zone I think we will probably get a strong enough bounce at that point to produce a daily cycle low. However, considering that this intermediate cycle topped on week two I don’t think this intermediate decline will be done until the dollar breaks below that October bottom, producing a failed intermediate cycle. So I’m going to look for a shortened daily cycle during the second half of March with a final intermediate bottom probably on the April jobs report. 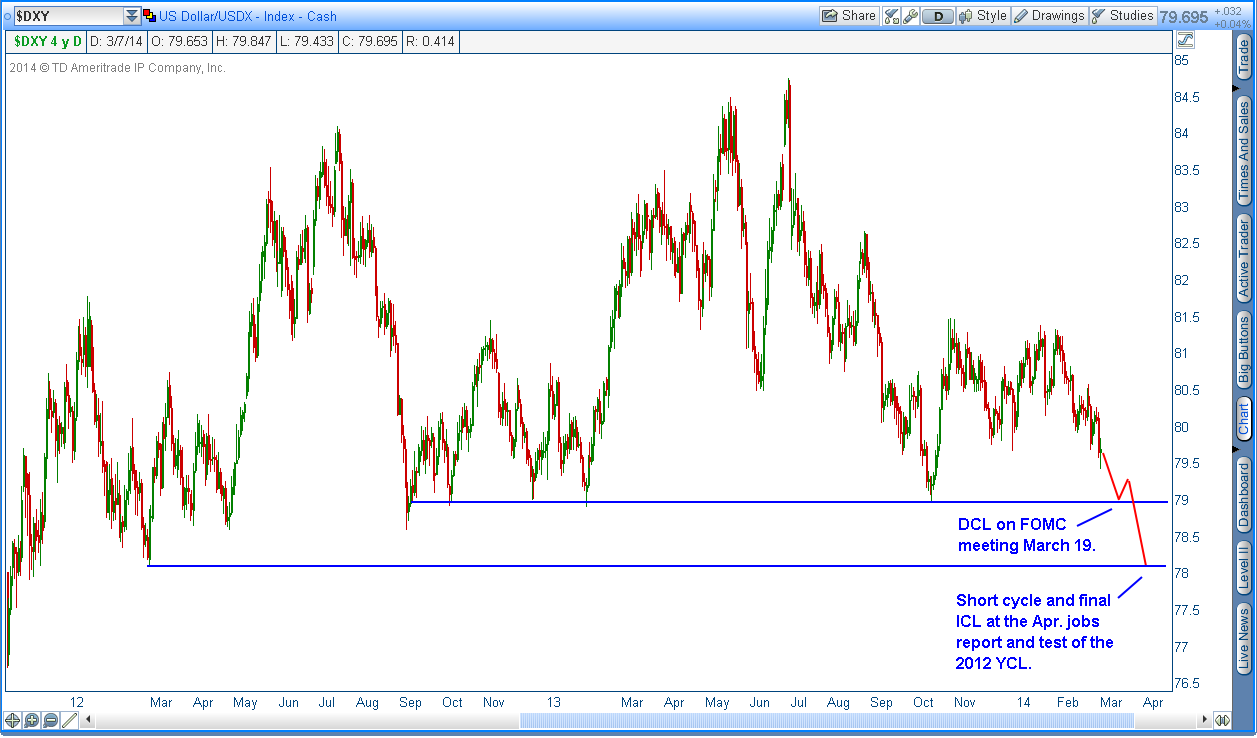 With the January and February employment reports coming in very weak, and the March report respectable at 175,000, I think the market is going to want to see confirmation from the April report before the intermediate trend in the dollar reverses.

Make no mistake, currencies are what is driving the commodity markets, not demand, and I don’t expect them to top until the dollar index finds its intermediate bottom.

While it’s not absolutely necessary, it probably wouldn’t hurt if the stock market were to drop down into a half cycle low over the next week and divert some buying pressure into the commodity markets as well. If Ukraine concerns were to flare up again this weekend that could presumably tip stocks over into a mild corrective event for a few days. I’m not sure last Monday’s one-day drop qualifies as a true and complete move into a half cycle correction. If that’s the case then next week would fit the timing band perfectly for this minor profit taking event that usually occurs around day 18-25 in the stock market daily cycle. (Monday will be day 21.) 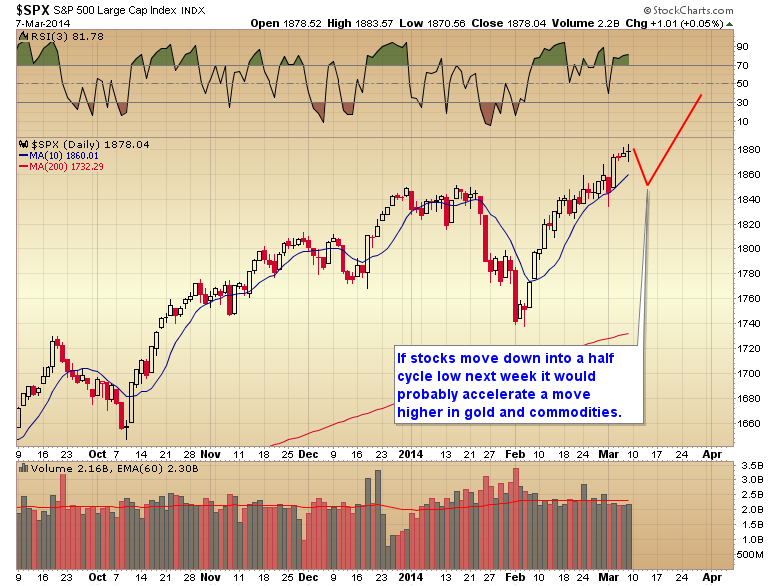 So how does this all tie in to next week’s move in gold you ask?

Well, if the dollar continues to drop into its daily cycle low over the next 8-10 days, and especially if the stock market lends a bit of a boost by falling into a half cycle low, I think gold should break through this resistance zone at $1350 and move up to the $1380-$1400 level over the next week and a half. 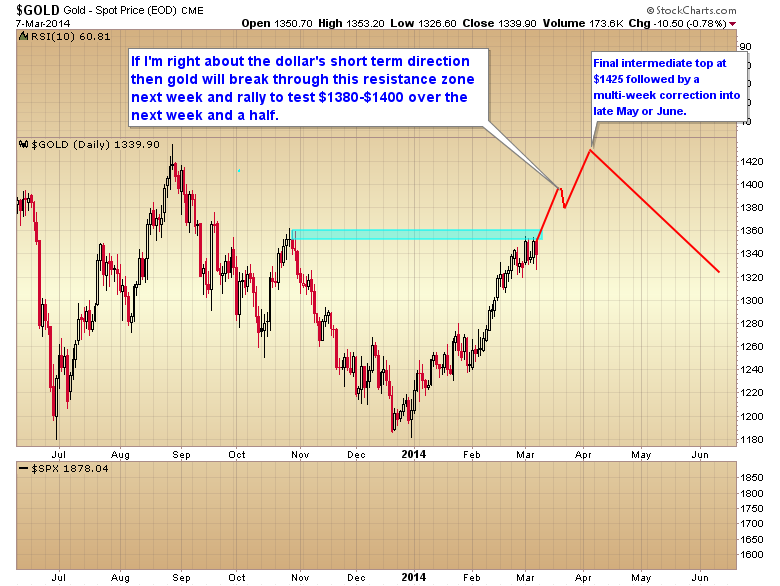 Then assuming that I’m right about a short dollar cycle into the April jobs report, gold should finish its intermediate rally with a test, or marginal break above the $1425 resistance zone in early April before dropping down into a multiweek correction that should form a yearly cycle low sometime in late May to early June. 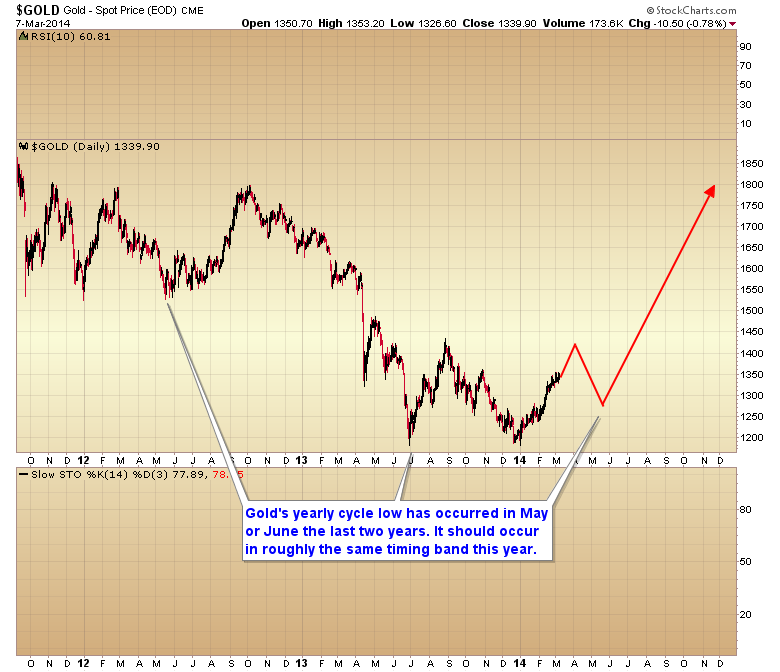 It’s the move out of that yearly cycle bottom this summer where the real fireworks are going to begin in the commodity and metals complex. I’ll have more on that in later articles.

If you are interested in my daily and weekend commentary on stocks and commodities including real-time changes in my 5 model portfolios (currencies, commodities, stocks, bonds and metals portfolios) along with conversing with other investors/traders via the SMT blog, consider trying a $10 trial subscription to the SMT newsletter.

Next week in the gold market